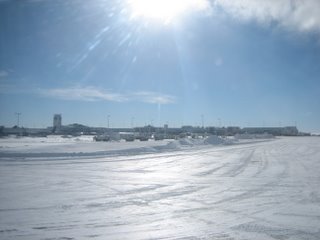 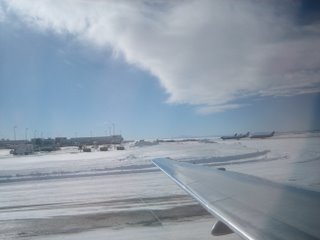 Sure, we all knew that Colorado had gotten a lot of snow lately. But when Billie, Peg, Letha and I were on the plane approaching the Denver airport, we were surprised by the expanse of white ground, as far as you could see, in every direction. The runway was partially clean, but there was still lots of ice and snow around the edges, and enormous mounds piled here and there where the snow had been pushed back from the runway. The sun was shining brightly, though and the day looked promising. When we got on the shuttle bound for Breckenridge, the driver told us that our trip would take longer than usual, but he couldn't say how much longer. We had to take an alternate route because of an avalanche that had occurred a couple of hours earlier. The snow had come crashing over the highway, covering several cars, and sending one of them rolling 200 feet or so down the side of the mountain. All eight of the cars' occupants were rescued, but the highway was closed and all of that traffic was going the same way we were. So the 1 1/2 hour trip turned into a 3 1/2 hour trip, but we were just happy to get here. 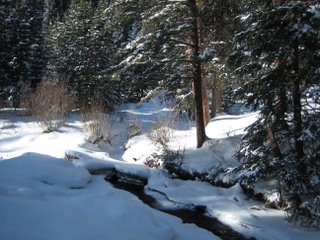 We had planned to ski today, but when we heard that the HIGH temperature on the mountain was going to be around zero, and that the wind was going to be gusting to 60 mph on the peak, we decided we'd pass. We walked to town, did a little shopping, ate lunch, went to the grocery store and came back to the condo for some of Billie's yummy chili. Tomorrow we ski.

Jose Cuervo, you're not a friend of mine tonight 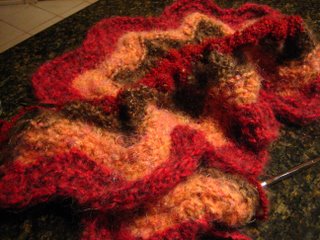 Tequila and knitting don't mix. Even a novice knitter like me understands that there might be some issues if I continued knitting the afghan after discovering that my last row, which should have consisted of 216 stitches, had somehow grown to 228 stitches. Hmmm. Tequila, combined with a little lime juice, triple sec, and curcacao, is a soothing elixir after a hard day of cooking, entertaining family, giving my mother a permanent (or "home permanent" as she calls it), cutting her hair, cutting my husband's hair, blah, blah, blah. But it might have left me feeling a little too confident and could have diminished my attention span just a little. I couldn't make myself to go sleep with those extra 12 stitches on my mind, so I reverse knitted the row onto a different set of circular needles and then re-knit it back onto the original needles. Yep, I'm feelin' pretty smug right about now. And I came SO close to the 216 stitches that it should have been. SO close.
at 12:04 AM No comments: